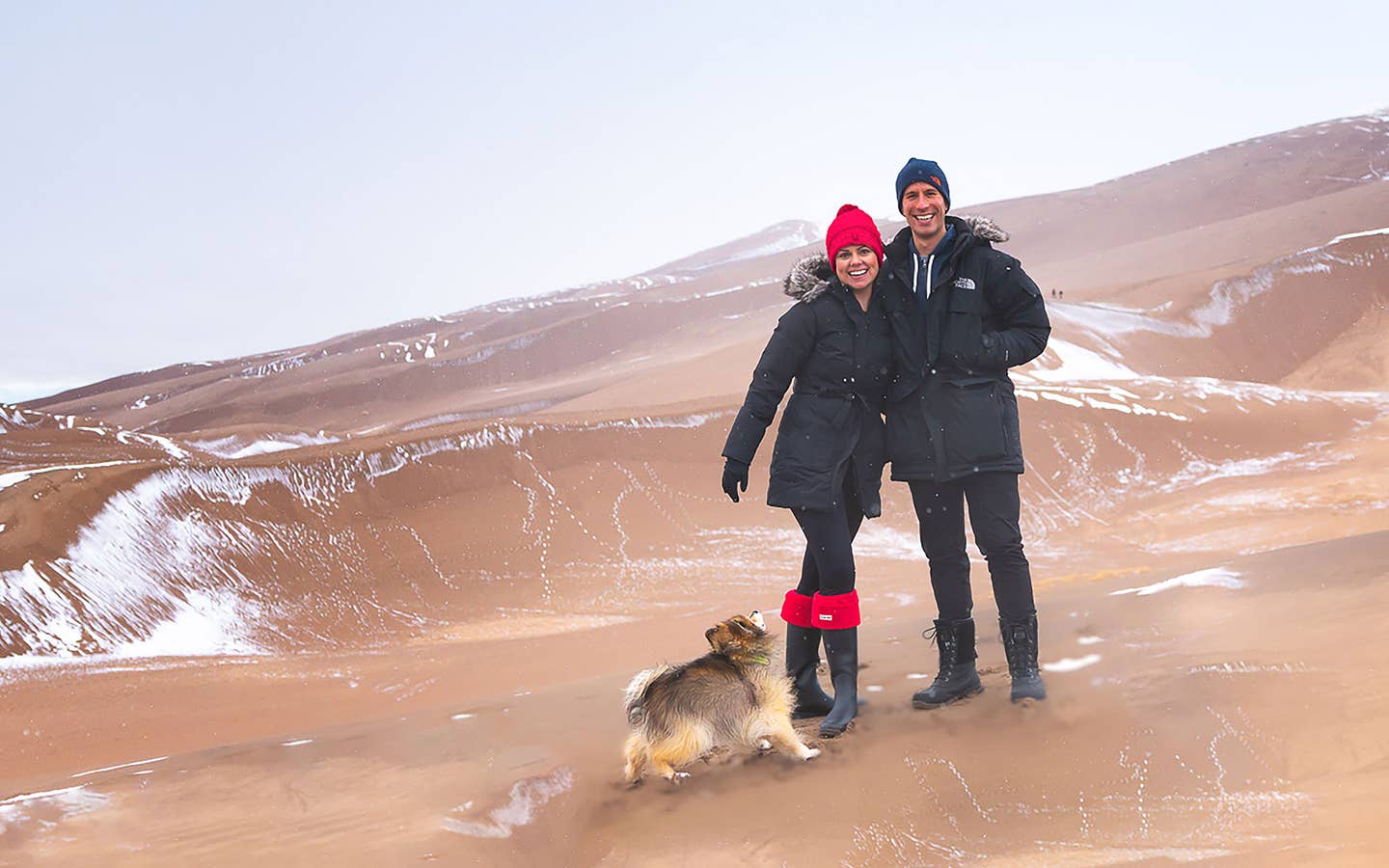 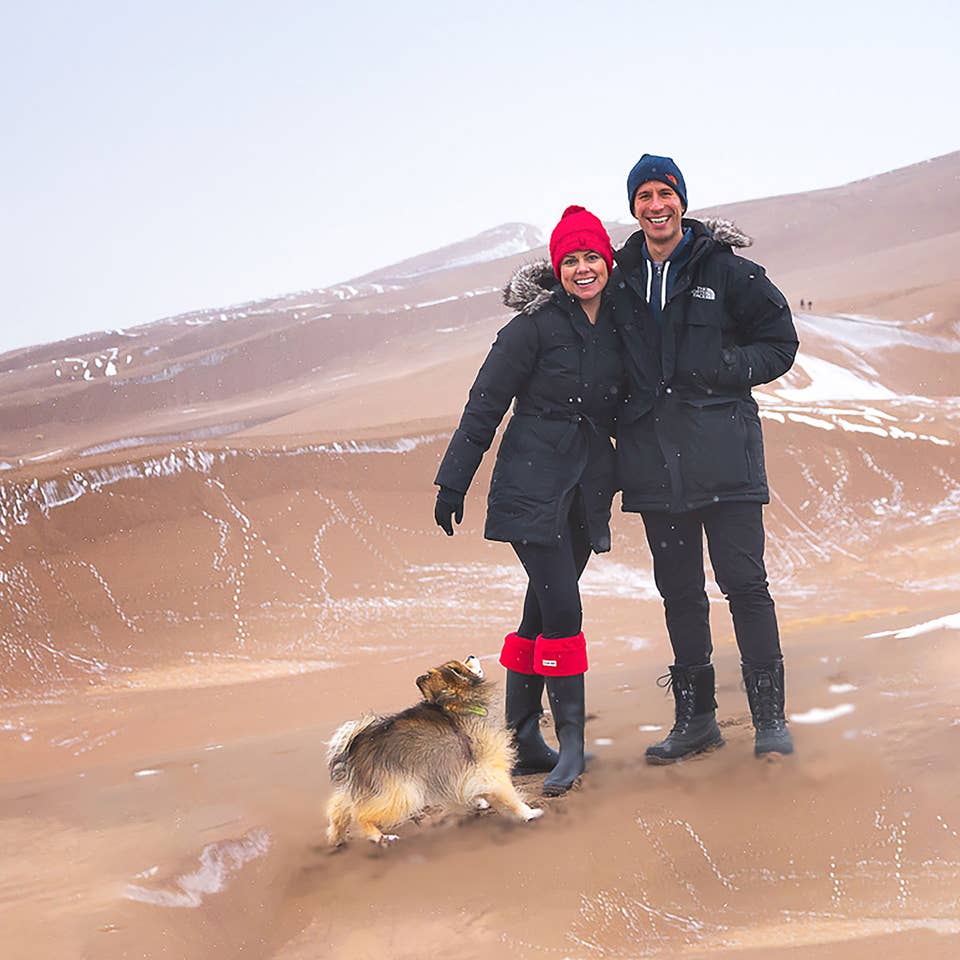 Lauren Layne is the New York Times best-selling author of romantic fiction. Her books have sold millions of copies and were featured in Oprah Magazine, Publishers Weekly, Glamour, The Wall Street Journal and Inside Edition. Lauren’s high school sweetheart, Anthony LeDonne, is an NYC-based comedian, writer, actor, chef and award-winning photographer. He also hosts the POAT Podcast every week, where he discusses topics like why restaurants push the window seat, how not to get divorced when both spouses work from home, and why people quit social media. Together, they have a black and orange Pomeranian, Bailey, who is about 3x “too big” for her breed at 15 lbs. and refuses to acknowledge she’s technically elderly. Her hobbies include chicken treats, barking at her kibble for not being chicken treats and nervous toots when it rains. 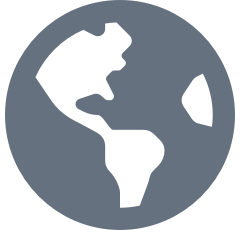 You may be thinking: Who are these people, and how are they qualified to talk to me about road trips?

We don’t mean to brag, but we’re just going to come out and say it: We’re really good at couple’s road trips. Why? Practice. Lots of practice. 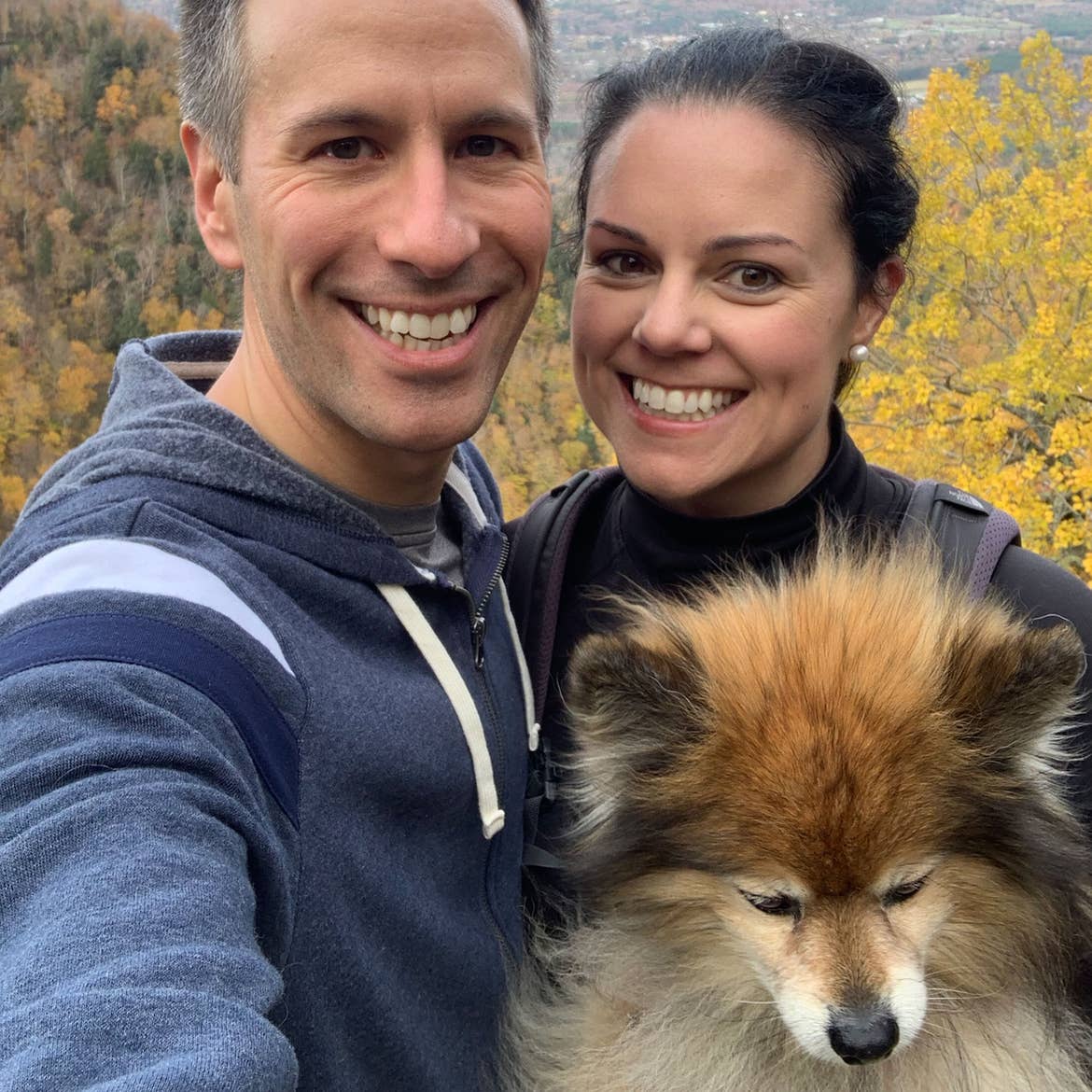 We currently live in NYC, but our family resides on the west coast (we’re originally from Seattle), which means we’ve made the cross-country road trip from NYC to Seattle and back again several times (plus the occasional jaunt down to California). And that’s not counting the spontaneous trips from NYC to Arizona.

Our biggest and most recent road trip to date? Oh, just that time we drove from NYC to Seattle … by way of Maine … and New Orleans … over 30 days … all with our small, not-so-well-behaved Pomeranian in the backseat. Or on the driver’s lap, depending.

So what’s it like to drive cross-country in the United States with your spouse? With hours and hours (think 30+ days at a time on the road) of real-life couple’s road trip experience, here are five tips we’ve learned along the way! 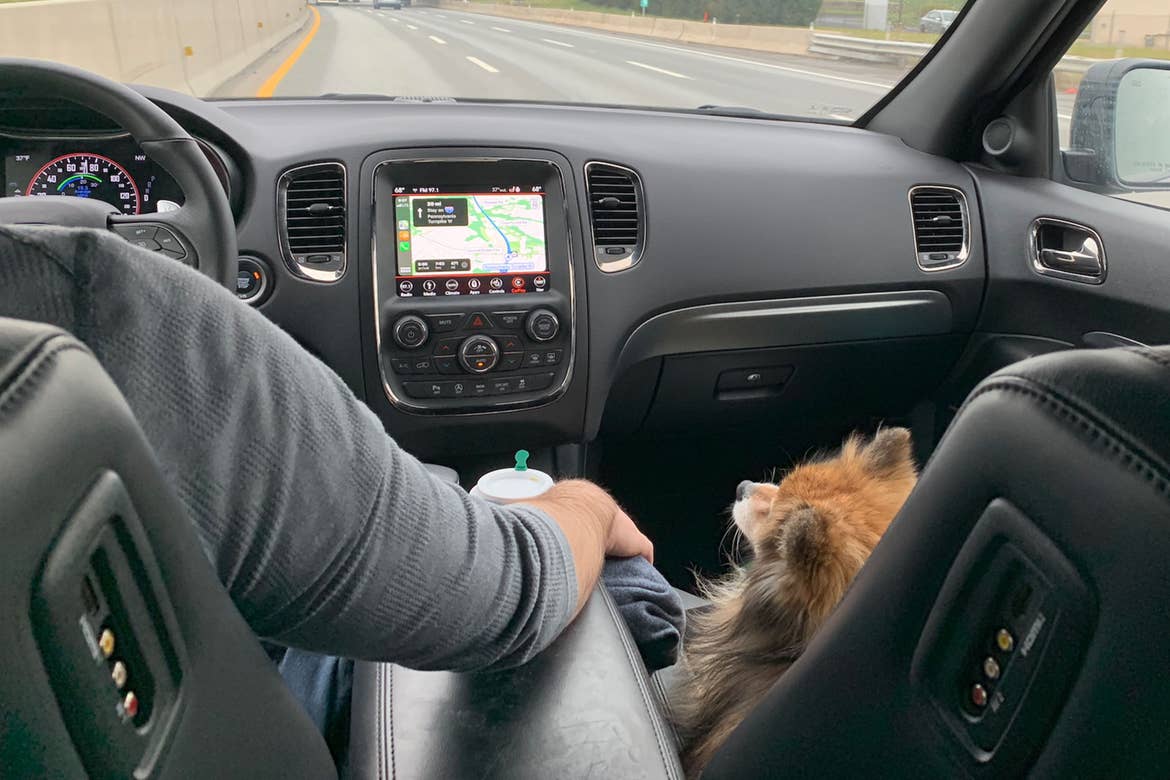 1. Make a plan. But leave room for spontaneity.


Lauren: I am a planner. I like rules. Schedules. Systems. I even like deadlines. Which is why it came as a bit of a surprise to me to learn that when it comes to travel? I hate itineraries.

The second I “have” to be at a certain spot on a certain day, my enjoyment of the trip seems to fade. Which wouldn’t be a big deal, except my husband, who’s far less rigid than me in nature, came into our most recent cross-country road trip (aka the big one!) with a spreadsheet of where we were going to be each night of our one-month adventure. Horror.

I tried to roll with it, but by day three, I was tense and resentful, as if I was on a mission instead of a vacation. It led to us not having a good time. One long talk in St. Louis later, we decided to compromise: We’d set a few of his “must-haves” in ink, but the in-between would be a bit looser, giving us the glorious freedom to decide where we would sleep that night on the drive. 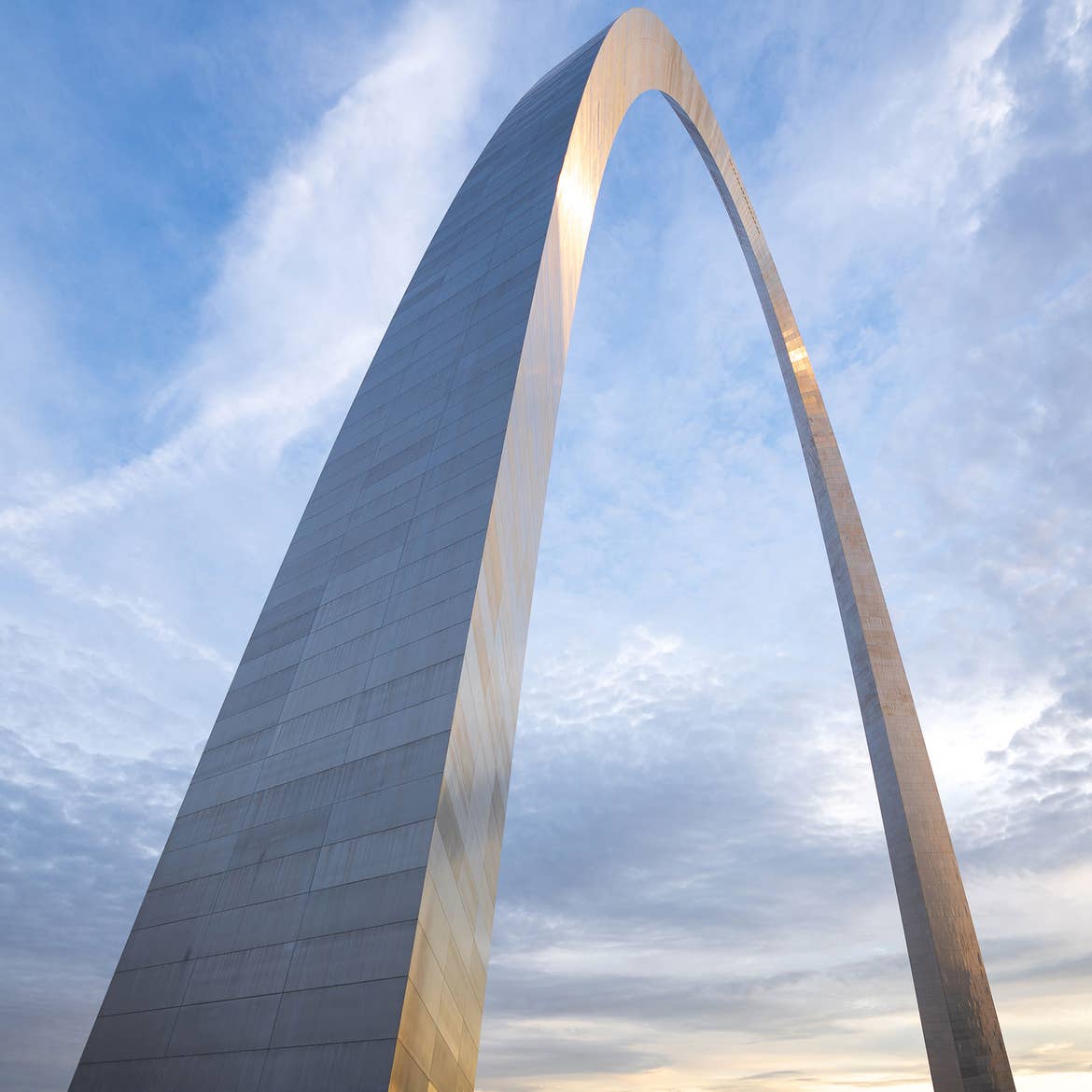 Anthony: That was an important conversation ... It helped me understand that what I thought was a helpful task—I’ll plan everything to make our lives (and my photography hobby) easier!—was actually super annoying to my spouse.

Even though I thought it’d be necessary for such an ambitious 20-state endeavor, planning every location ahead of time put a damper on the spontaneity we’d enjoyed in our previous couple’s trips. Instead of enjoying new stops on our journey, we were just checking them off a list.

So now I’ve adopted what I call the Boy Scout Method of Couple’s Road Trip Planning. Their motto is “Be Prepared.” Should our spontaneous route take us through one of the locations in my photography location spreadsheet, I’m prepared to take pictures. And if not, I get to enjoy the couple’s trip with my wife! 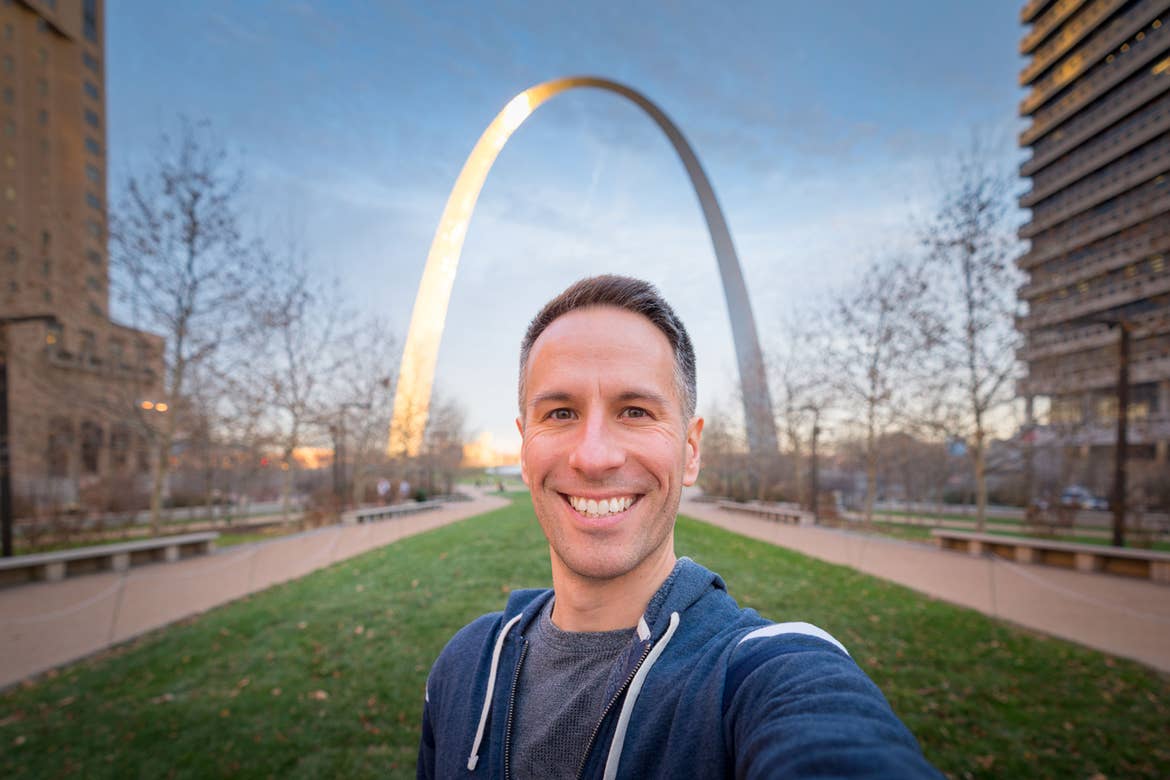 2. “Pet-friendly” does not always equal wallet-friendly


Lauren: If you’re new to traveling with a dog, we’ll give it to you straight: A lot of hotels don’t accept pets. At all.

But here’s where the insider tips come in: Don’t get too excited when a hotel comes up as “pet friendly” in your search, because while they may allow dogs, they may also charge you. One pet-friendly hotel may have a $10 pet fee, the one right next to it, $150!

In fact, we’ve occasionally found the non-refundable pet fee to cost more than the room itself. Always check the website (or call) for the pet fee before booking to make sure you’re not blowing your entire trip budget on a dog fee! 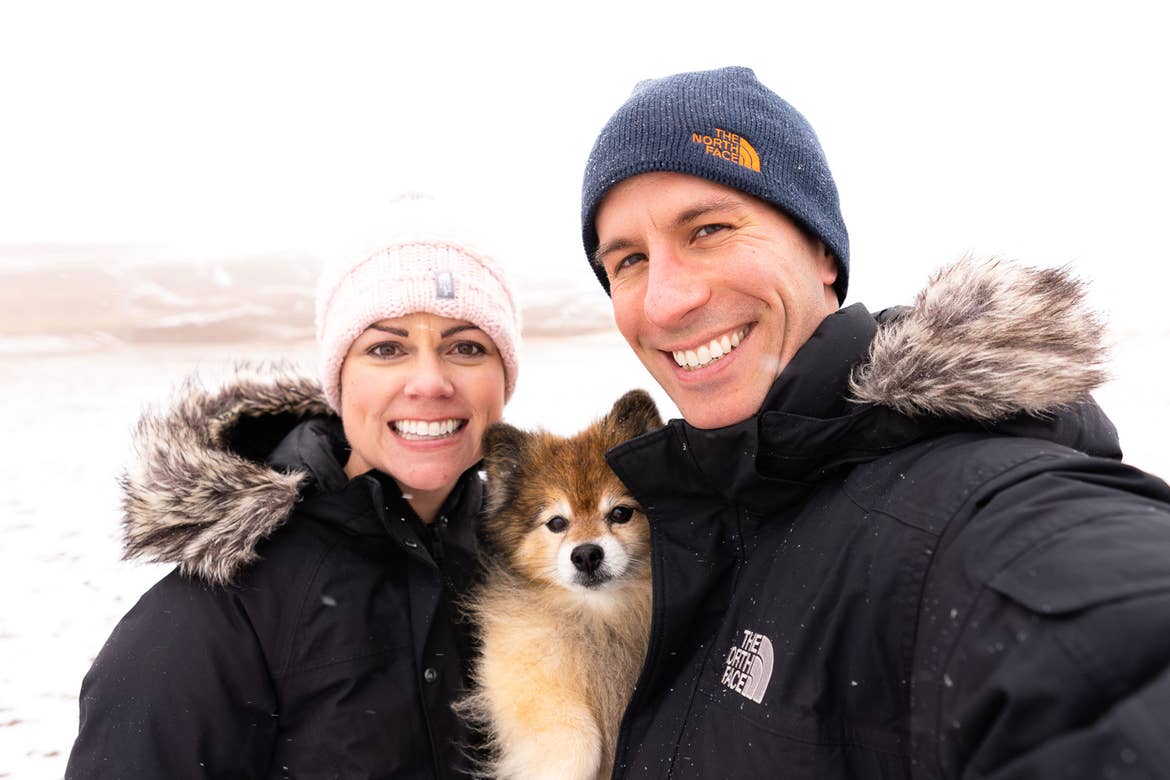 Anthony: So now I’m going against everything I just said in the first point by telling you that some research is important. My least favorite thing about the check-in process is that “surprise” over how much the pet fee is. Some hotels charge a refundable deposit. Some charge a one-time non-refundable fee, plus a nightly pet fee. There’s even variability within the same chain of hotels.

So, do your research. Also, it doesn’t hurt to ask the front desk associate if they’d consider waiving the pet fee. I tried this once, and the associate was happy to accommodate. But don’t get grumpy if they can’t waive it. Sometimes it’s simply beyond their control!


Lauren: Anthony does most of the driving. And by most, I mean almost all of it, unless he’s drowsy. I’m grateful, and as such, he gets to pick the food stops, the music, the audiobook, etc.

If your relationship is opposite, where you both want to drive, then maybe it’s the passenger who gets to pick the food and music. Regardless, decide this before the start of your couple’s trip to avoid hangry arguments! 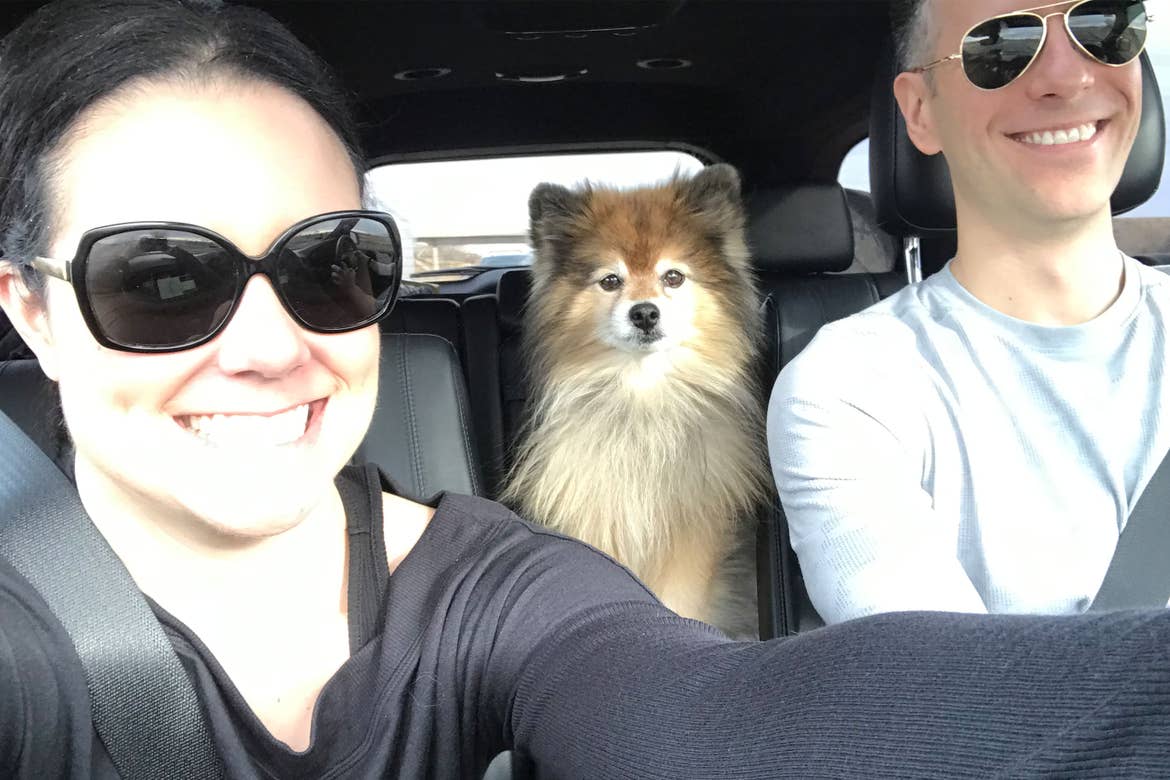 Anthony: I like this rule, but I always ask if Lauren has a preference. Mostly because I’m a gentleman, but also because I usually don’t have a strong preference when it comes to food and entertainment.

We have a game we play when we’re feeling indecisive. It’s called ... wait for it: The Ring. Lauren removes her ring—which, I might add, comes off a little too easily—and says the ring represents one of our lunch or entertainment options. Then I’ll shout “left” or “right.” She opens whichever hand I call, and we go with that option.

Most of the time we’ll follow The Ring’s decision, but if we don’t like its choice, we’ll go with the other option. Either way, it forces the decision, so we don’t end up bickering about it!

4. No snags. Only memories.


Lauren: We arrived at White Sands National Park in New Mexico; the stop Anthony was most looking forward to on the entire 31-day couple’s trip. Having never been and knowing what we were doing, we pulled off and parked on the side of the road.

He went to the trunk to begin gathering his camera equipment, and as I set the dog out to “do her business,” I saw that just a few feet ahead was a real parking lot, which was clearly where we were supposed to park. 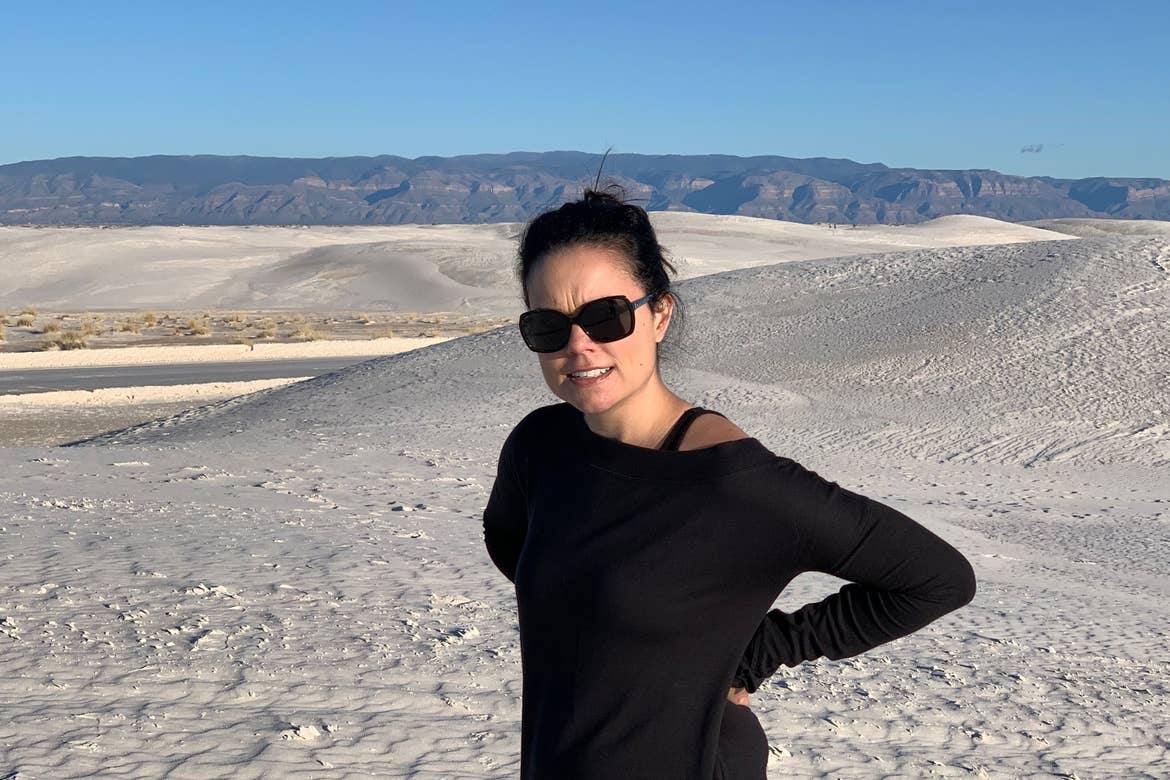 I called out to him and pointed toward the lot. He nodded in acknowledgment and shut the trunk. Followed by: Oh, {enter bad word here}.

We’ve been together for 20 years, so I knew even before he started racing around the car frantically trying door handles what had happened: The keys were locked in the car.

I’ll let him talk about the adventure that ensued, but I’d like to say this: sitting in the sand in the middle of nowhere for three hours could have been the low point of our trip. Instead, it was the highlight. Having sandcastle building competitions, while the dog had the time of her life digging, while we waited for AAA is not only the thing I remember most about that trip, it’s my favorite part.

Anthony: As the one who caused/planned the White Sands snag, all I can say is “you’re welcome.” 🤦‍♂️

Even if I hadn’t done this on purpose, I’d still agree with Lauren: You gotta roll with the punches. This particular memory provided several big punches to roll with: We had limited cell service, we were in a remote part of the monument in a remote part of New Mexico, and despite being in the desert, it was getting cold.

Whenever we hit a snag, I try to reframe the situation. Getting stuck in Middle-of-Nowhere, New Mexico, becomes “the three-hour walk to the ranger station will get my steps in.” Limited cell service becomes “distraction-free enjoyment of the desert.” And the falling temperature at dusk becomes “maybe we’ll see some interesting wildlife at night.” 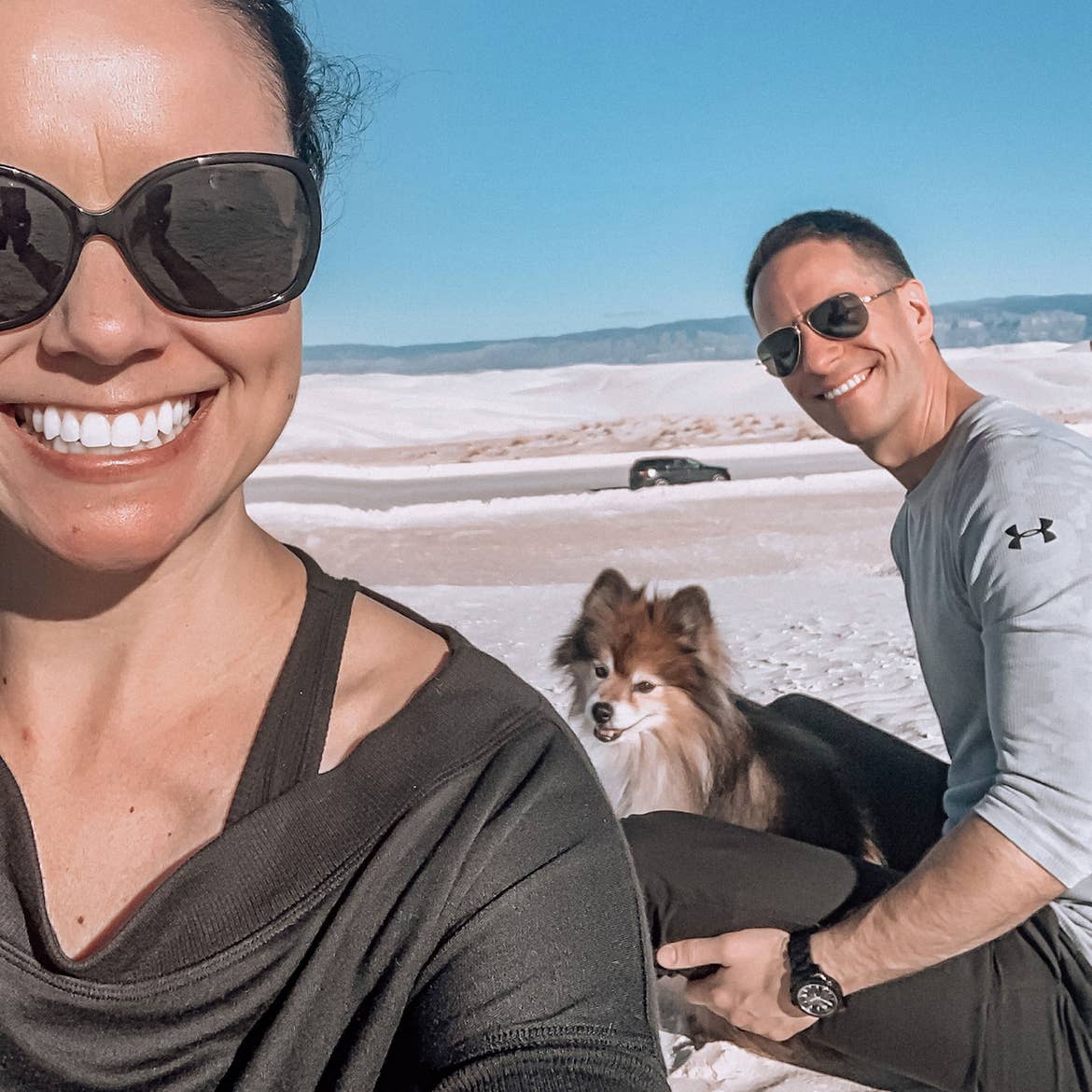 
Lauren: I’m about to get really annoying, but road trips are about the journey.

When I’m sick of the car, tired of fast food, annoyed with the dog who’s just farted, and anxious to get to our “spot” for that night, I look over at Anthony and remember that we’re lucky to have this time together. 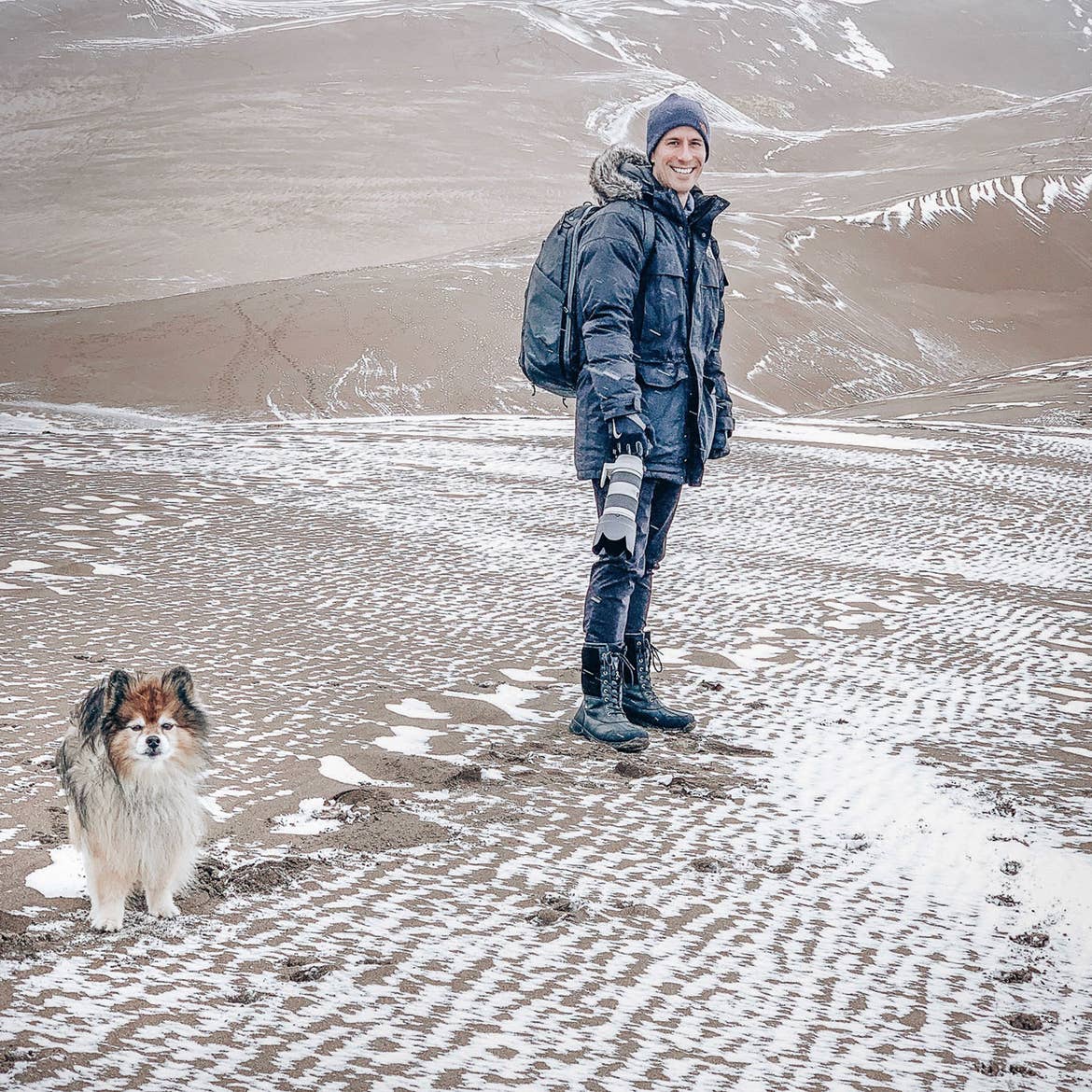 If you think of the greasy breakfast sandwiches, the dog farts and the (sometimes) ugly terrain as things to endure, you’re missing the point of the road trip, which is that glorious, messy togetherness that makes relationships so very special.

Anthony: I totally agree. It may sound counterintuitive, but the road trip really is about the journey and the way you and your road trip comrades deal with whatever comes your way. It isn’t just about the places you go and the things you see, it’s about possibility, potential, and, yeah, probably a few dog farts. 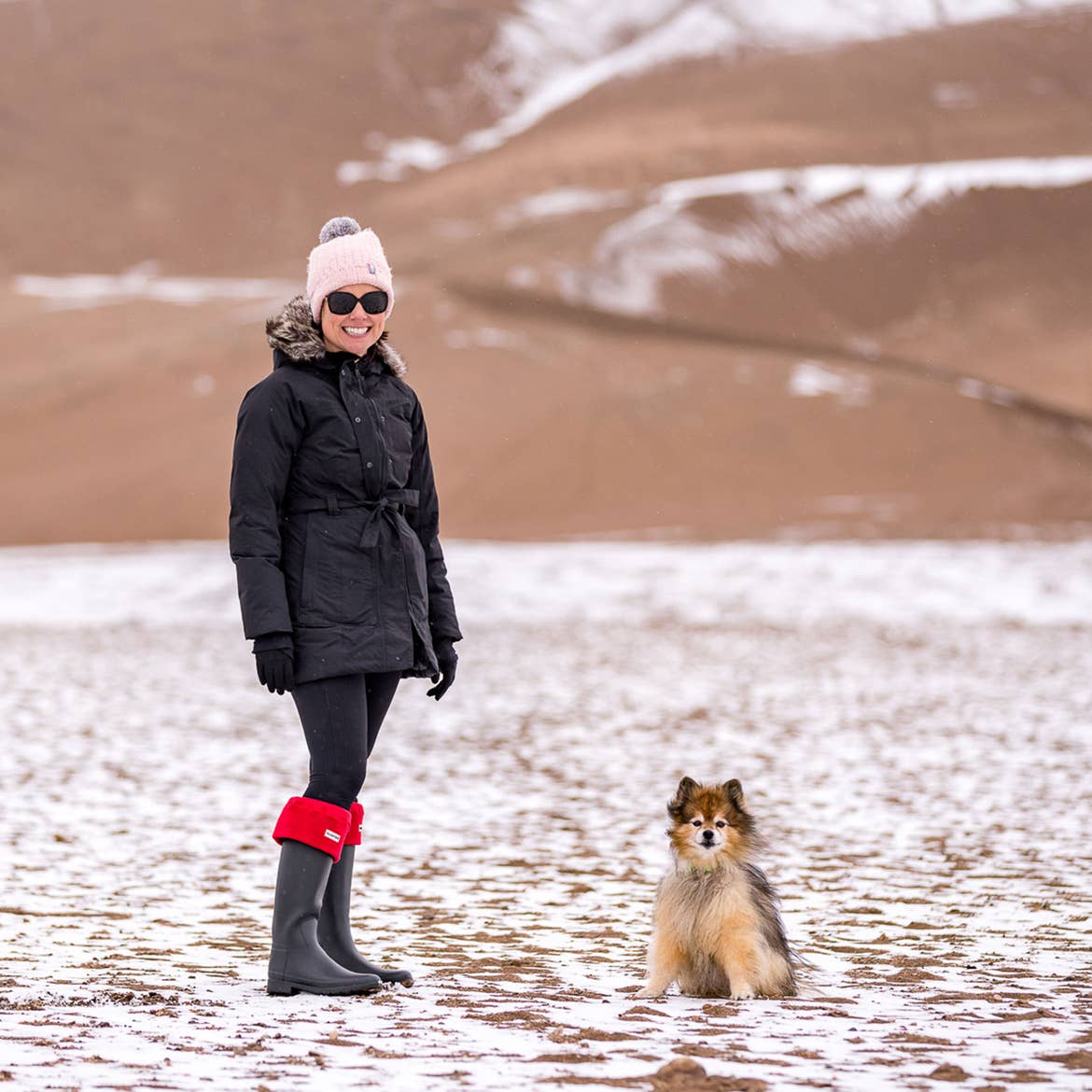 Our guest bloggers are compensated for their writing contributions and honest opinions.

Lauren Layne is the New York Times best-selling author of romantic fiction. Her books have sold millions of copies and were featured in Oprah Magazine, Publishers Weekly, Glamour, The Wall Street Journal and Inside Edition. Lauren’s high school sweetheart, Anthony LeDonne, is an NYC-based comedian, writer, actor, chef and award-winning photographer. He also hosts the POAT Podcast every week, where he discusses topics like why restaurants push the window seat, how not to get divorced when both spouses work from home, and why people quit social media. Together, they have a black and orange Pomeranian, Bailey, who is about 3x “too big” for her breed at 15 lbs. and refuses to acknowledge she’s technically elderly. Her hobbies include chicken treats, barking at her kibble for not being chicken treats and nervous toots when it rains.